Background: SIRT5 is one of the seven members (SIRT1-7) of the mammalian sirtuin family of protein acyl-lysine deacylase enzymes. In recent years, important regulatory roles of SIRT5 in (patho)physiological conditions (e.g. metabolism and cancer) have been increasingly demonstrated. For a better biological understanding and therapeutic exploitation of the SIRT5- catalyzed deacylation reaction, more effort on identifying potent and selective SIRT5 inhibitors beyond those currently known would be rewarding.

Results: Among the cyclic tripeptides 8-13, we found that 10 exhibited a potent (IC50 ~2.2 μM) and selective (≥60-fold over the SIRT1/2/3/6-catalyzed deacylation reactions) inhibition against the SIRT5-catalyzed desuccinylation reaction. Moreover, 10 was found to exhibit a ~42.3-fold stronger SIRT5 inhibition and a greater proteolytic stability than its linear counterpart 14.

Conclusion: With a novel and modular structural scaffold as compared with those of all the currently reported potent and selective SIRT5 inhibitors, 10 could be also a useful and feasible lead compound for the quest for superior SIRT5 inhibitors as potential chemical/pharmacological probes of SIRT5 and therapeutics for human diseases in which SIRT5 desuccinylase activity is upregulated. 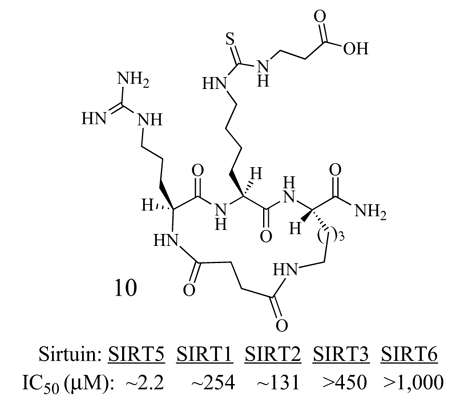