An Increasing Role of Polyphenols as Novel Therapeutics for Alzheimer’s: A Review


Alzheimer’s disease (AD) is the most prevalent neurodegenerative disorder, with approximately 29 million older people suffering from this disease worldwide. This number is expected to become triple by 2050. AD is a complex and multifactorial neurodegenerative condition, characterized by complex pathology including oxidative stress, formation of aggregates of amyloid and tau, enhanced immune responses, metal deposition and disturbances in cholinesterase enzymes. There is no effective pharmacological treatment for combating the disease to date. The ineffectiveness of current pharmacological interventions in AD has led scientists to search for more safe and effective alternative therapeutic agents. Thus, natural products have become an important avenue for drug discovery in AD research. In this regard, polyphenols are natural products that have been shown to be effective in the modulation of the type of neurodegenerative changes seen in AD, suggesting a possible therapeutic role. The present review focuses on the chemistry of polyphenols, clinical studies for evaluating polyphenols as effective alternatives in AD treatment, cellular and molecular aspects of polyphenols in improving cognitive deficits and the current challenges and futuristic approaches to use polyphenols as safe and effective therapeutic agents in AD treatment. 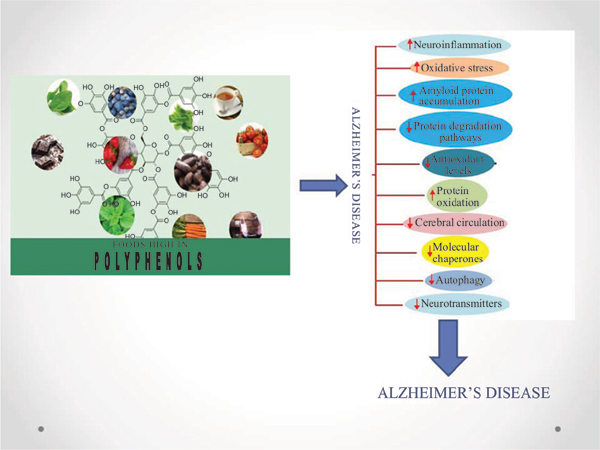