Background: Hypertension, one of the most common cardiovascular diseases that can cause coronary disease, stroke, myocardial infarction, and sudden death, it is the major contributor to cardiac failure as well as renal insufficiency.

Objectives: As there are many cardio-active pyridazinone-base derivatives in clinical use, therefore, we aimed to synthesize a new series of pyridazin-3-ones and evaluate their vasorelaxant activity. Methods: A new series of synthesized compounds were carried out first by the synthesis of 6- flouroarylpyridazinones by cyclization of 3-(4-flourobenzoyl) propionic acid with hydrazine hydrate or arylhydrazines to provide the corresponding pyridazinone derivatives 2a-d. Mannich reaction was performed using morpholine or piperidine formaldehyde to obtain compounds 3a,b. On the other hand, reaction of 2a with various chloroacetamide intermediates, in dimethylformamide and potassium carbonate as a catalyst, afforded the target compounds 5a-c. The aromatic acid hydrazide intermediates 6a-g were prepared in 50-90% yield, by reacting to the prepared esters with hydrazine hydrate under reflux in ethanol. The two compounds 8a,b were prepared via condensation of 7a,b with ethyl chloroacetate in dry acetone. Finally, the target 2,4,6-trisubstituted pyridazinones 9a-c derivatives were obtained by the reaction of 7a with the appropriate aromatic aldehyde or substituted acetophenones. The new compounds were then evaluated for their vasorelaxant properties using isolated thoracic rat aortic rings. In addition, a homology model was built and molecular modeling simulation of these compounds into the active sites of the newly created α1a-adrenoceptor model was performed in order to predict and rationalize their affinities toward this receptor. Results: Among these compounds; 5a was the most potent, it exhibited approximately two-times the activity of prazosin (IC50 = 0.250, 0.487 mmol, respectively) also, fourteen compounds were more potent than prazosin. 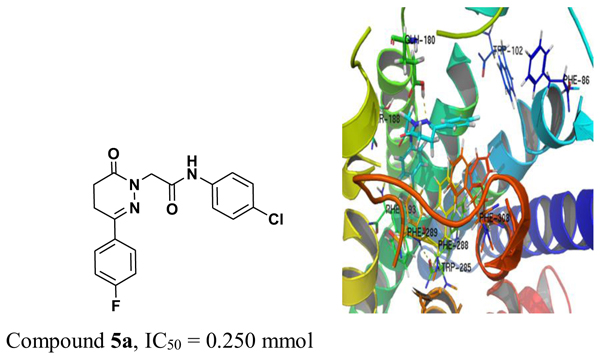